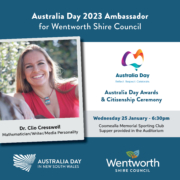 Wentworth Shire Council will hold its Australia Day Citizenship and Awards Ceremony on Wednesday 25 January 2023 at the Coomealla Memorial Sporting Club Auditorium in Dareton from 6:00pm. The event will consist of the Australia Day Awards presentation, Citizenship Ceremony and formal proceedings, followed by a light supper.

The Australia Day 2023 ambassador for the Wentworth Shire Council is Dr Clio Cresswell, faculty member of the School of Mathematics and Statistics at The University of Sydney. Dr Clio has research interests focused on the evolution of mathematical thought and the role of mathematics in society. The fascination is mathematics as the epitome of logic, problem solving and abstract thinking. She is the celebrated author of Mathematics and Sex; known for seeing the connecting themes across spectrums. Though the maths she gets called upon to explain most of all – and that includes every single news outlet in Australia – is… what are the odds of winning Lotto!

With English parents, her early childhood was on a Greek island and school was in the south of France where she studied Visual Art. Australia and mathematics were both joyfully discovered at eighteen, where she went on to win the University Medal and focused on Painlevé equations for her Ph.D. at The University of New South Wales. Today, Clio is a very proud Australia Day Ambassador.

Communicating mathematics has become integral to her work where Clio is now called on for comment by media worldwide, always highlighting the ubiquitous mathematical element to our lives. From The B Team with Peter Berner on Sky News Live, to Conan O’Brien on his late night show on TBS in the US, to being voted one of the 25 Most Beautiful People by Who Weekly. Admittedly, the latter was back in 2001 but still not bad for a fastidious mathematician!

Clio has delivered two TEDx presentations. One in Sydney at the Sydney Opera House, and one in Budapest.

This event is open for the general public to attend. Wentworth Shire Council will publicise all award winners at www.wentworth.nsw.gov.au following the awards ceremony.

Council extends their best wishes to all Australia Day Citizenship and Awards nominees for 2023.