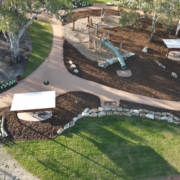 Wentworth Shire Council has been granted more than $2 million under the New South Wales Resources for Regions program to deliver infrastructure improvements and programs across the Shire.

Six projects received funding under the program, announced by Duty Member of the Legislative Council Wes Fang on Thursday.

$374,000 to build an all-weather surface shared-way from the Buronga Wetlands to the newly created Buronga Riverfront Nature Play area.

$300,000 to seal a car park and road around the northern oval at the George Gordon Sporting Complex in Dareton.

$292,300 to install a new toilet and amenities block at the Pooncarie camping grounds.

“I am excited to see these projects in Wentworth and surrounds come to fruition as they will have a real benefit to locals as well as visitors,” Mr Fang said.

Deputy Premier and Minister for Regional NSW Paul Toole said Resources for Regions has been highly successful with Rounds One through to Seven delivering 149 projects worth $345 million to communities since 2012.