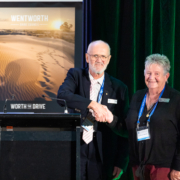 Wentworth hosted the event, which ran from Sunday 16 May until Wednesday 19 May, at the Wentworth Civic Centre with more than 150 delegates and speakers attending to discuss important matters relating to the Murray-Darling Basin.

Council received thoroughly positive reviews from the Murray Darling Association, delegates at the conference and the wider community who took advantage of local displays and markets in the Civic Centre’s foyer on Tuesday and Wednesday.

“It was fantastic to see the Civic Centre a hive of activity this week for the conference, which was greatly supported and should provide a significant boost to our Shire’s economy,” Wentworth Shire Mayor Susan Nichols said.

“I would like to congratulate the Murray Darling Association, Wentworth Shire Council Staff and all other stakeholders on making this event as great as it was, as well as the Wentworth community for being so welcoming and willing to showcase everything our region has to offer.

“It was equally fantastic to be able to show the potential of the Civic Centre, whose own redevelopment is out for public exhibition, during the conference.”

This week’s event included afternoon tea on the PS Ruby on Sunday followed by a Civic Reception at the Old Wentworth Gaol, a study tour to the Menindee Lakes and Pooncarie on Monday and a gala dinner aboard the PV Mundoo on Tuesday night as well as the two days of the conference itself in the Civic Centre’s auditorium.