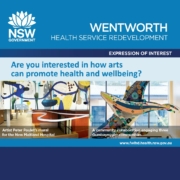 We’re looking for enthusiastic people to join an Arts Working Group to help drive the integration of art, culture and heritage into the new Wentworth Health Service Redevelopment to ensure it’s a place that is welcoming, promotes wellbeing and reflects the unique local community.

Download the Expression of Interest form to join the group and make a difference. Fill it out, save it and send it back to us! Applications close on Friday, 16 December 2022. The Murray River at Wentworth may reach 34.10 metres AHD around late December (25-26
December), with major flooding.

A prolonged peak is possible through to early January, with major flooding.

A prolonged peak is possible through to late December, with moderate flooding.

The river is currently 38.15 metres and rising.

Are you needing to get your kids home from boarding school, but are isolated?

The New South Wales State Emergency Service is able to assist in getting your children home safely at the end of this school year.

Read the flyer below for more information. 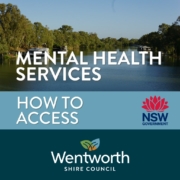 Many people may be feeling anxious, worried or afraid within flood-affected communities.

Looking after the mental health of ourselves, friends and family is an important part of staying well.

If you need support, there are a number of services you can access for free.

The below websites have a mixture of self-guided mental health resources and programs as well as one-on-one connection to professionals through webchat, online counselling and phone services.

For further information, please view the flyer below. 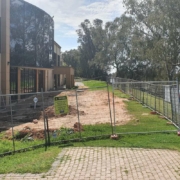 The period between 20 December and 10 January (inclusive) is excluded from the calculation of required public notification days as per Schedule 1, Part 1, Division 3 section 16 of the Environmental Planning and Assessment Act 1979.

The Bureau of Meteorology advises rainfall over the past several weeks and months has caused renewed and prolonged flooding along the Murray River.

The Murray River at Wentworth may reach 34.10 metres AHD around late December (25 – 26 December), with major flooding.

A prolonged peak is possible through to the end of December into early January, with major flooding.

A prolonged peak is possible through to late December, with moderate flooding. The river is currently 38.08 metres and steady. 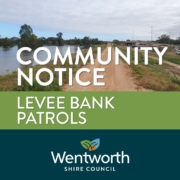 The public should not be alarmed seeing Police on the levee banks. They are here to support Council by assisting with monitoring of the integrity these structures.

This is a precautionary measure only and is for the community’s protection. 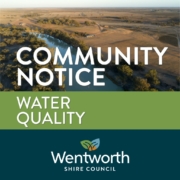 Due to flood waters reaching the southern fence line of the Wentworth Cemetery, council have conducted sandbagging and additional works to prevent water entering and surrounding grave sites. Please be assured that the cemetery is currently safe from flooding.