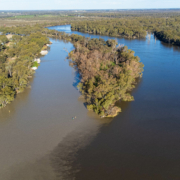 One of Wentworth’s biggest tourism attractions, Junction Island, is again opened to the public.

A fire on the island in April 2021 forced its closure until it could be declared safe.

Following an arborist’s inspection, which identified several safety hazards preventing the early re-opening of the Island, and remedial works by Wentworth Shire Council’s Parks and Gardens team the popular Murray Darling Junction spot can now be accessed by locals and visitors.

“Junction Island forms a large part of the identity of Wentworth, both the town and the wider Shire, and having it closed really robbed us of one of the jewels in our crown,” Cr Elstone said.

“I am glad to see it re-opened and I encourage locals and visitors alike to take a trek across and re-acquaint themselves with the Island and its surrounds.”

In further good news for Junction Island planning is well under way for the replacement of the existing bridge to the Island. The new bridge will also be able to accommodate light service vehicles which may be required on the island for minor maintenance.