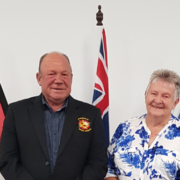 Wentworth Shire Council has elected a new Mayor, Councillor Susan Nichols following the recent resignation of former Mayor, Melisa Hederics who stepped down from her role after holding the title for the past four years.

At the Extraordinary Meeting of Council held today, two nominations were received, with Councillor Nichols securing the top job over Councillor Elstone following a tied vote resulting in a draw from a hat. Councillor Elstone had been acting in the Mayoral role for the past two weeks and will continue as Deputy Mayor.

In her acceptance speech, Mayor Nichols said she was looking forward to serving as Mayor and thanked her fellow colleagues for entrusting her with the responsibility of leading Council. Mayor Nichols said “I would like to thank the previous Mayor, staff and fellow Councillors. I acknowledge that we have a strong committed workforce and I look forward to delivering our grant projects on time and within budget.

“Wentworth Shire is really on the move thanks to significant external funding and Council will roll-out a multitude of infrastructure projects over the next twelve to eighteen months including the repurposing of the former Wentworth RSL Club to house Council offices, visitor, interpretive, conference and library spaces, upgrade of the Wentworth aerodrome and sealing of the Menindee road.

These are exciting times for communities across our local government area and I encourage residents and business operators to take a proactive role in the development and growth of our Shire. This is my fifth term with Council and I look forward to continuing to serve the community in this new role,” Mayor Councillor Nichols added.

Mayor Nichols will Chair her first Ordinary Meeting of Wentworth Shire Council on Wednesday 18 November 2020 at the Midway Centre Buronga commencing at 10am. You can also view the live public sessions of each Council meeting on Facebook or after the meetings via Council’s website.