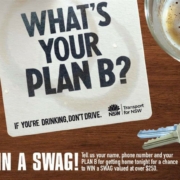 Motorists across the state are being urged not to drink and drive this festive season, as part of a Statewide campaign to raise awareness about planning ahead.

Transport for NSW Acting Director West Kristy Hartwig said patrons are being encouraged to share their Plan B for getting home safely after a night out, by entering the NSW Government’s annual ‘Win a Swag’ competition.

“It has been an especially difficult year for NSW after being locked down for much of it, and with the resumption of regional travel there are now plenty of reasons to celebrate,” Ms Hartwig said.

“However, staying safe on the road must remain front of mind and this means having a Plan B ready if you have too much to drink, so that you don’t get behind the wheel.

“We don’t want to see any crashes on country roads over the holiday period but especially not alcohol-related crashes, which are entirely preventable.”

All pubs, clubs and bottle-shops in the Wentworth Shire are participating in the Plan B campaign this year with 13 swags up for grabs.

Swags will be drawn late January so there’s plenty of time to get entries in.

Wentworth Shire Council Road Safety Officer Belinda Fitzgerald said it was a testament to the commitment to road safety that every venue was so willing to sign up to the campaign.

“Local bar staff are proudly wearing their Plan B shirts and reminding customers to plan a safe way home while they enjoy being merry over the holiday season,” she said.

“In addition, our local radio stations will be giving away cab charge cards throughout December to help listeners get home safely during the silly season.”

Ms Hartwig said drink driving is one of the biggest causes of death and injury on country roads across NSW.

“While country residents make up only one-third of the NSW population, two-thirds of all fatalities occur on country roads. This year 175 people have died on country roads, and at least 19 per cent of those fatalities were from crashes that involved an illegal level of alcohol,” she said.

“In the western region alone, in the five years to 2020 50 people were killed and 184 seriously injured in crashes where alcohol was a contributing factor.”

Patrons at more than 300 participating regional pubs, clubs and bottle shops across the state are being invited to enter a competition to nominate their Plan B for getting home. Each entry will go into the running to win one of hundreds of swags valued at over $250 each.

“This is all about being prepared and having your Plan B mapped out ahead of your night out,” Ms Hartwig said.

“If you’re planning on drinking on your night out, the best advice is always to avoid temptation and leave the car at home. No one wants to start 2022 without a licence.”

Drink driving is a serious offence. It is also an offence if you refuse to take a breath test.

Penalties can include loss of licence, fines, prison terms and a requirement to install an alcohol interlock device. If you are a repeat, high-risk drink driver, police will also have the power to take your number plates or vehicle on the spot. For more information visit https://roadsafety.transport.nsw.gov.au/campaigns/plan-b/index.html