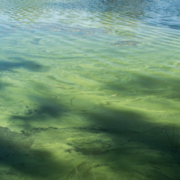 The latest results from Water NSW and Lower Murray Water indicate there’s been a modest reduction in cell growth over the past 10 days where Dolichospermum and Chrysosporum spp. dominate the algal assemblage.

Blooms comprising predominantly Nostocales (e.g. D. plantonicum) tend to occur in mid-Autumn, and in some systems can be followed by Microcystis blooms.

A successional shift to densities of colony forming species, such as Microcystis is unlikely at this point.

The cyanobacteria population in the lower Murray River contains <5% species from the Orders, Chroococcales (Microcystis) or Oscillatoriales, and water temperatures are within the low risk range (<16 DegC).

The Red Alert previously issued for the Neimur River has been lifted.